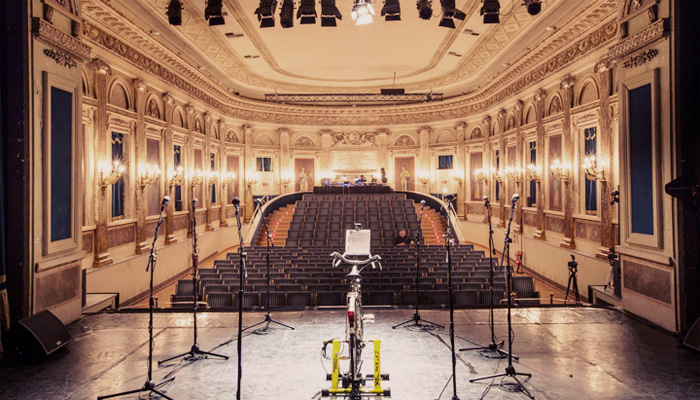 The building was constructed between 1840 and 1842 after the setting up of the Accademia Filodrammatica. Its members wished to have a permanent building for the staging of their plays, which had previously been performed in private houses. Of the original theatre, as it appeared to the eyes of the Filodrammatici, there remains the description provided by Pietro Visetti following its inauguration on 21 January 1842 in the presence of Prince Vittorio Emanuele, with the performance of a tragedy by Carlo Marengo and a comedy by Eugène Scribe. The ground floor, used as a reception area, opened onto a «delightful octagonal room specially designed to serve as a waiting area». One passed on into a grand elliptical vestibule from which commenced a sumptuous staircase up to the upper floor. Here there was the auditorium and service areas. Visetti dwelt upon the “majestic proscenium, supported by four fluted columns”, upon the ceiling on which were masterfully carved several panels and upon the “elegant musical emblems decorating the platforms around the side”. Praise, therefore, for Leoni, who had succeeded in transforming such limited spaces into a building of impeccable classical proportion and graceful in its architectural decoration. In 1956 it underwent careful restoration, which was by then necessary, carried out by the architect Mario Augusto Valinotti. Over the years this theatre was transformed into a new cultural centre and Teatro Gobetti thus became an alternative theatre, for secondary productions. In 1984 the theatre had to close for all of its security systems to be brought up to date and its stage remained silent for almost twenty years. It was reopened on 18 April 2001 with the first performance of Luigi Pirandello’s “La ragione degli altri”, directed by Massimo Castri.